The historic Western mining town of Clifton, Arizona, has been been the subject of many documentaries, newspaper articles and even a popular Country and Western song! Here are just a few: 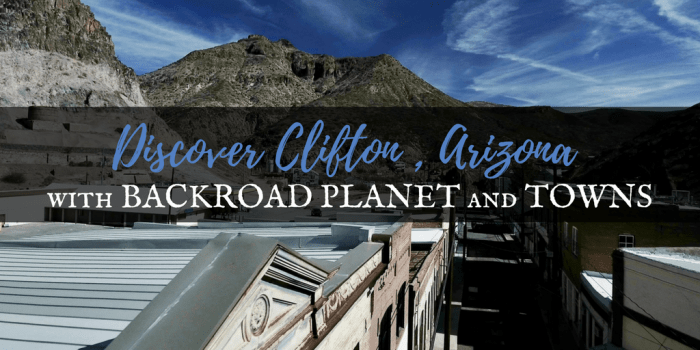 Backroad Planet partnered with Chad Harris of Hotseat Media to create an Amazon Prime series called Town. The series immerses viewers in the lives of real people, intriguing local characters from diverse backgrounds who are the lifeblood of small town America. In Episode 1, Chad travels to Clifton, Arizona, a backroad town Howard traveled through last year on his Arizona Road Trip. Clifton's comeback is the cover story for the June 28 issue of the Tucson Weekly.

"Sleepy Clifton is on the brink of a renaissance, led by locals and transplants who love the town's overflowing history and are putting their backs into its revival." Watch Now
"Salt of the Earth" "Salt of the Earth" is a 1954 film written by Michael Wilson, directed by Herbert J. Biberman, and produced by Paul Jarrico. All three blacklisted by the Hollywood establishment due to their alleged Communist affiliations. Told from the point of view of the miners' wives, its plot is based on the 1951 strike against the Empire Zinc Company in Grant County, New Mexico. In the film, the company is identified as "Delaware Zinc," and the setting is "Zinctown, New Mexico." The film shows how the miners, the company, and the police react during the strike. It was shown round the clock at the Clifton Union Hall so workers from all shifts could see it. Arizona is full of former mining towns oriented towards tourists: Tombstone, Bisbee, Jerome and Goldfield. While these towns do offer visitors to the Grand Canyon State an accessible introduction to the state's mining history, some people might feel jaded wandering around in towns full of antique shops, expensive restaurants, and souvenir shops. Large crowds might also turn off other visitors. Fortunately, there are other towns that are not tourist-oriented and may offer a more authentic mining-camp experience. One such place is Clifton, Arizona.

Los Mineros means "the miners" in Spanish and a PBS documentary by that name documents a half century of struggle for equal rights by Mexican-Americans who worked in the copper mines in Clifton and Morenci.

Journeyman D.T. gentry sold hit song "Open Pit Mine" to the country singer George Jones in the early 1960s. The recording made it to the country "Top 20" in 1962 and became popular again a few years later in a full band version by Johnny Gray.

In "Revenge of the Saguaro: Offbeat Travels Through America's Southwest," Tom Miller talks about tracking down the song's composer, D.T. Gentry:

In 1952, 24-year-old Delbert Gentry headed west from his native Arkansas, looking for work. "I stopped in Clifton for a few days and stayed with friends. I was so struck by the area that I applied for a job at the mine," he recounted over the phone in a rich Ozark accent. "They wouldn't take me on account of my size. I was five-three and worked in he potato patches. I made enough to get back home to Arkansas."

Yet something about Clifton stayed with him. Gentry moved north a few years later and found work at the Fisher Body Plant making car frames for General Motors, where he worked until his retirement. During convalescence from minor surgery, he wrote out his copper miner's Romeo and Juliet. It had been taking shape in his mind ever since that brief stop in Clifton nine years earlier.

In the summer of 1961, Delbert Gentry went to a George Jones concert and stood in the autograph line afterward. "Would you listen to a song if I sent it to you?" he asked the star. Jones gave him his address and a friend of Gentry's made a reel-to-reel demo tape of "Open Pit Mine".

"I sent it off and got a contract by return mail September 1, 1961. It was a dream come true. Every six months or so I get a small check. Sometimes it'll be shut off for a couple of years, then I'll get another one."

As for the characters in the song, Gentry says he was only in Clifton a few days, and never anyone there named "Rosie."